This universe consists of Energy that has been created perfectly with certain mathematic equations.

Human beings have changed the original equations to their own equations.

When I was a kid, I promised myself with very strong emotion and passion that one day I will become a good programmer.

A good programmer for humans to solve their problems, the True Random Equations, Probability, and Events that are not predictable.

Time is valuable in every second for me to learn new things, and make a special contribution before this life is over.

I believe knowledge is a tool of power and this is the reason I love learning new things, especially in the ICT field and becoming a fully-powered stack developer. 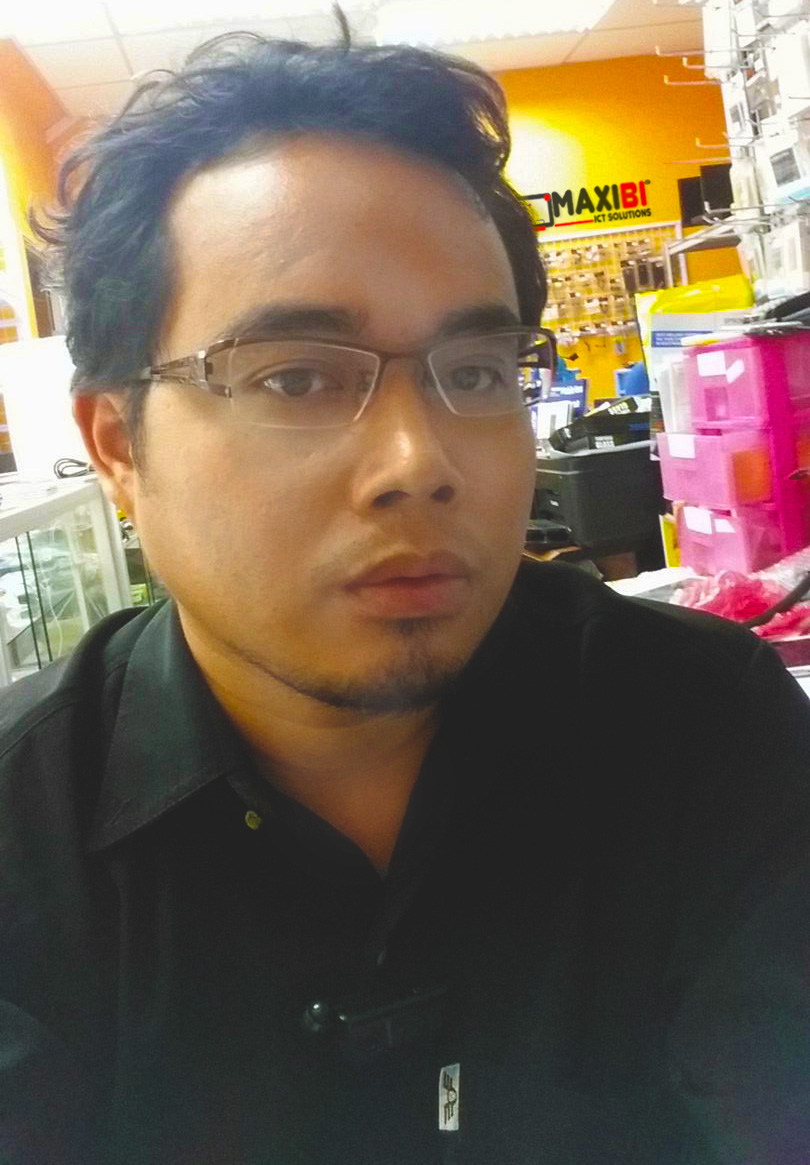 - He is an Operation Manager; managing and coordinating various backend business operations in a fashion company focusing on the IT field

- In the past, he worked as a web developer and iOS mobile phone programmer at Art In Software Sdn Bhd (AIST)

- He has been working as a Freelance web developer since 2007

- He is a super self-learner and has had a lot of experience in the IT field since he was a kid. He is considering himself as a Full Stack Developer

- The programming/scripting languages that he loves the most are Python, C#, Java, JavaScript, PHP, Bash, Shell, VB.net ...

- The programming subject that he is super interested in is A.I. Automation.

- He graduated with Diploma in Information Technology from Multimedia University, Melaka, Malaysia - With honors

- He graduated with Preschool certification from Sekolah Tabika Kemas Tanjung Minyak, Melaka (The school's building has vanished with a new building)

- He graduated (Khatam) Al-Quran School when he was 8 years old from his late grandmother. He also studied Jawi from his father and he can read Jawi fluently at the age of 10


A little other not well-known background history about him:

- He was born stateless

- When he was 16 years old, he developed many VB6 projects as a hobby. One of the most time-consuming VB6 projects was the free offline Malay<->English dictionary called G-Kamus. This dictionary was developed using Visual Basic 6 programming language. He also created the project's website at g-kamus.com. The dictionary was successfully released and used internally by his friends in school without making it public on the website. In 2007, the project was abandoned due to time constrain at university.
1) The uneditable project web archived in 2006 (before it was released; beta version): link
2) Project screenshot: link

- When he was 15 years old, he created a math game in Bahasa Melayu called "Permainan Congak Matematik Ahmad Arafat" for Windows Platform using the same VB6 programming language. At this age, he already has a basic understanding of how to use Sprite Animation in game development. The uneditable project web archived can be seen in this link

- He created his first online website using Yahoo Geocities when he was 14 years old using HTML and javascript. At that time he did not have high-speed internet offered by ISP, but a super slow internet from an ISP called Jaring

- All his programming skills during childhood came from self-learning

- His first programming language was Visual Basic 6 (VB6) and the oldest operating system that he ever used during childhood was Windows 95 on a big CRT monitor. He started to love Linux in 2009

- He has been interested in electronic stuff since he was still in primary school and started his first computer repair in middle school. At that time, he was frustrated that he could not use his desktop computer for a few months due to an auto restart issue and some technicians that he met could not fix it. Some of them even came to his house to check the wall plug issue but they did not find any solutions. Due to the frustration of not being able to use a computer for a long period, he finally fixed the issue by reading the motherboard's manual and he then discovered it was the CPU jumper overclocked issue on the AMD board which caused the computer to restart randomly. With the discovery on that day, he realized that fixing a computer was not that hard if he could study about it. He started to learn more about computer repair by taking some computer repair courses with an experienced technician, and doing a lot of home-to-home computer repairs when he was still in middle school. On July 2016, he opened a computer and mobile repair phone store in Melaka and he had done many computer and mobile phone repair jobs. For him, it is not surprising that a lot of programmers nowadays are not able to fix their computers because their job scope is only to understand the software stuff and never touch the hardware components. However, he believes that it is essential for a programmer to know how to fix a computer to reduce maintenance costs.

- He can speak 3 languages fluently

- He likes listening to music and playing musical instruments (he is now more interested in digital music instruments). When he was in primary school, he used to perform a lot of songs on stage. During that time, he even wrote his original song called Indahnya Alam which in English is translated as The Beauty of Nature. He perfomed that song in Sekolah Agama Bukit Rambai and won the first place as solo Nasyid singing. The prize was given by the headmaster of the school, the late Ustaz Johari.

- He had a bad history of hacking that went famous at a university. In 2008, during his time at university, he was among the best student in programming subjects in his class, and he was bullied a lot by a classmate for his nerdy look. The bully was a foreign student wearing a 'gangsta chain' who had challenged him to hack his social blog which he had many followers on. He remembers the bully challenged him by saying, "If you can hack my blog, I'll give you full respect but I do not think you can do that because you are just a nerd who only likes to memorize things". He accepted the challenge face to face in front of the other students and his roommate as witnesses. On a Friday night in 2008, he successfully accessed the bully's blog and made some changes to the blog's database. Unfortunately, he made a mistake by putting his own name on the front of the web page as the responsible 'hacker' where he thought accessing the bully's blog was only a peace challenge made for him. On a Saturday morning in 2008, he sat alone in a room when his housemate went outside to buy breakfast, the bully came with his companion, broke the door, and hit him multiple times on the head causing physical injury. The bully also held a large scissor and threatened to kill him with it. However, the bully and his companion had apologized and the police report that had been made on housebreaking and causing physical injury had been withdrawn for further investigation as he accepted the apology from the bully. On the following day, the rumors went on campus and he became famous in university as a Gray Hat Hacker with a unique online username. The lesson learned here is, that you should never expose yourself as a responsible hacker if you hack a blog that has many online followers!

Status: Working on some projects not available for hiring